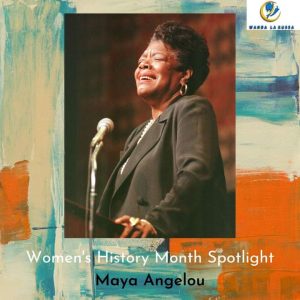 For International Women’s Day, I want to spotlight the legendary Maya Angelou. She is how I aim to be: powerful orator, kindness overflowing from her speech and action, inspiring and encouraging people, specifically women to do what they were created to do. She was so gentle, courageous, eloquent, and had so much meaning when she spoke (and wrote).

Maya was mute for 6 years after her mother’s boyfriend raped her, and she believed her confession of that had led to his death after he was jailed and released. She made the written word her outlet. She loved poetry, and she memorized some Shakespeare and Edgar Allen Poe.

Angelou published I Know Why the Caged Bird Sings in 1969, which gained her great recognition. Even more than that, it encouraged other abuse survivors to share their stories and work toward their healing.

Some other works by her include: Even the Stars Look Lonesome, A Brave and Startling Truth, The Heart of a Woman, Still I Rise, and The Complete Collected Poems of Maya Angelou. I encourage you to read/listen to her. I hope that encourages you.